I am so happy to have this opportunity to offer tribute to Khansahib, who so powerfully influenced my life. Meeting Baba changed the course of my life, and I cherish each of my many memories with this remarkable human being. Like so many others, I have a plethora of wonderful stories of my experiences with Khansahib. I’ve chosen to share a story which to me demonstrates the complexity, magnanimity & beauty of this phenomenal man. 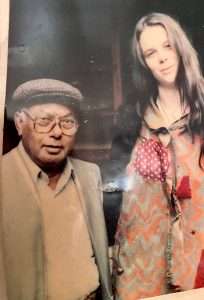 When Khansahib taught for two years at UC Santa Cruz, my love of driving, travel and overall eagerness for the position led me to the amazing role of being his driver for these weekly trips. On the first day of classes, Bubai (who accompanied Baba on tabla for these classes) and I requested that Khansahib and his entourage (Jimmy and Alam) pick us up in San Francisco. Although Baba had usually traveled through the East Bay to go to Santa Cruz, I insisted that traveling through SF was the better path. The hardest part of the trip this way is the part from San Rafael to San Francisco of course, (pre-Fastrak times), and when they picked us up at 19th Avenue and Rivera, Khansahib was fuming with having to drive through slow and heavy traffic to come to the city.

When we got into the car, Khansahib let us know he was very unhappy for being asked to travel over the ‘Golden Bridge’ instead of through Berkeley. I had never seen Khansahib so angry, and I felt awful for asking him to change his preferred route to help us out. We apologized profusely, and I assured Baba that although the first leg of the journey is perhaps more congested than the other way, the rest of the trip would be much better using this route. He told me that he wanted to curse us, as he was so hopping mad, concerned about being late, bothered with the traffic, etc. But he said he would withhold his curse because it was very powerful. He said that he grew up with a cobra over his head, and the experience of surviving this threat had given great intensity to any curse he would unleash, so he did this very sparingly. I again begged his forgiveness, thanked him for not cursing us, and promised him that he would see that I did know the best route to Santa Cruz, and that overall, he would enjoy the journey much more traveling on the path I suggested.

All was smooth sailing once we got onto the freeway, his anger lessened, and we had a mostly enjoyable ride. (As much as is possible when you are fretting over angering a legendary maestro.) On the way home, I volunteered to drive, and it was decided that I would be the driver going forward, as Jimmy needed a break from chauffeur duty, which was a hopeful sign. The following week we went via the East Bay, which was definitely not as pleasant (in my opinion), but we wanted to let Baba choose the route. After that, he was open to trying a few different ways. Over the course of the next ten weeks of driving to and from Santa Cruz every Friday, we explored a multitude of ways to get there, and to return. Although for the most part we usually drove through San Francisco, and home via Highway 1.

On the very last day, with his unique and amazing kind smile, Khansahib told me that I was right after all, and my way was the best route to Santa Cruz. He said he completely forgave me, he was sorry for being so angry, and he was very glad he never cursed me. It was such a sweet and happy moment for me, and immediately cleared the pain in my heart for having angered him. The next year we only drove the way I had suggested for all of the ten weeks. I so love how he was willing to say sorry for a mistake he had made. I also greatly appreciate how he waited for the full ten weeks, until all of the options had been explored, to consider if my opinion was in truth a valid one. This happened several times with me with Baba, and I found he would always apologize when he was wrong about something. I have always been touched by his humility and ownership of his thoughts and actions, regardless of his prominent stature. This is just one of many fabulous stories, but one very precious and dear to my heart.

With My Love and Sincere Pranaam to Baba,