Banani Ghosh, with true pedigree and authenticity, is a name synonymous with Tagore. She is the only artist from India to promote and propagate the genius of Nobel Laureate poet Rabindranath Tagore to the North American audience, and hence has been regarded as the Musical Ambassador for Rabindrasangeet [songs from Rabindranath Tagore]. 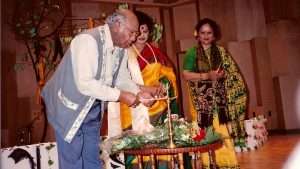 To promote the genius of Tagore, Banani opened “Antara” – a music school that was dedicated to the teaching of Rabindranath Tagore, with branches across USA and Canada.

The San Francisco chapter of “Antara” was opened and felicitated by none other than Ustad Ali Akbar Khan – seen in these pictures during the inaugural ceremony.

For Banani, preaching, teaching and performing the works of Rabindranath has been life itself. 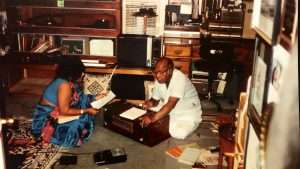 With her passion to expand her repertoire into other forms of music, Banani receiving tutelage in Bhajan from Ustad Ali Akbar Khan – seen here in this photograph.